Album of the Day #147: TOGETHER THROUGH LIFE - Bob Dylan 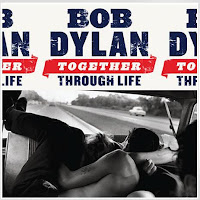 Bob Dylan has changed himself so many times, whether it’s going electric, going Las Vegas, going Born-Again or going stately gentleman like in recent years, that it feels like his changes are just another part of his everyday artistic process. With Together Through Life, Dylan makes another drastic stylistic change. Vocally, the record is similar to Modern Times, since his voice is so ravaged by rampant touring that we should be happy he still has one.

However, as soon as you slide the disc into your player, immediately you can feel that things are different. The lyrics are simpler and all but one song was co-written with Dead lyricist Robert Hunter. The band behind him is different, too. He dropped his two regular guitarists in favor of Heartbreaker Mike Campbell and Los Lobos member David Hidalgo, who also added the accordion which is all over the record.

The album kick starts with Beyond Here Lies Nothin’, the single, with Dylan proclaiming that “I love you pretty baby” and right away, the accordion assault starts! It’s apparent that this album is allowing for his band to tear it loose. I love the line: “Beyond here lies nothing/nothing but mountains of the past…” Dylan’s moving forward, by looking back, musically anyway.

Life is Hard starts off with this great mandolin that resonates throughout the track. It kind of has this feeling like "Sprit On The Water". He’s reminiscing about a lost love and his vocal is nothing short of funny, especially during the verse about walking by the schoolyard.

My Wife’s Hometown has a traditional Willie Dixon melody and the lyrics fit it perfectly. “I just want to say that Hell is my wife’s hometown!” It’s a fun line so it’s obvious that Dylan and Hunter had a ball writing these lyrics, but three songs in, you wonder, where are the characters that are together through life?

If You Ever Go To Houston has a really jaunty feeling and more of Dylan going back in time, saying that he “nearly got killed during the Mexican war”. The accordion is more present here than any track so far.

Forgetful Heart is already my favorite track, especially with that scorching guitar solo. It feels so un-Dylan, which is great to me, but the sing still has this animosity toward the love of the song that only Dylan could pull off.

The second half starts with the obvious throwaway of the record, Jolene, with its’ simple blues shuffle and great guitar licks. Finally we get a song where Dylan is eyeballing a girl. I’m telling you right now, this is going to be a song Dylan will be dragging out on the road. Like “Honest With Me”, it will all drive us nuts, but I bet this is going to be the one songs he performs over and over again.

Next is the waltz-y This Dream Of You. Again, this is like the crooner tracks on “Love & Theft” and Modern Times, but his vocal is much better. The lyrics are beautiful and I love “Shadows dance on the wall/Shadows that seem to know it all”. On top of that, the guitar solo is beautiful. This is my weeding song, ladies!

Shake Shake Mama is another basic blues track, but much harder than “Jolene”. It falls in the classic hall of songs about evil women that you just want to get away from! If that’s not what the blues is about, I don’t know anything! His vocals are so suited for this type of stuff now, it’s just amazing.

I Feel A Change Comin’ On was also released prior to the album by Newsweek, but this, more so than “Beyond Here Lies Nothin’”, feels much stronger in the sense of an album. Behind the accordion, the key instrument on the track for me is George Recile’s amazing drumming. He really pulls his weight on the track, adding fantastic cymbal flourishes that just add to how amazing it is. I don’t know whether the song really has anything to do with Obama, but after listening to the songs and the lyrics, I highly doubt it. It’s a song about a man feeling that there is a change comin’ on in his love life, not socially around him. This isn’t “The Times They Are A-Changin’” but a simple song about the beauty of knowing that there could be changes in your love life.

The rolling romp It’s All Good closes the record. While probably the worst closing track in recent memory on a Dylan album, the truth is that the fun in the melody and the lyrics tells you that Dylan was tired of ending his albums with apocalyptic tracks. Time Out Of Mind ended with the mammoth “Highlands”, which is hardly a positive story about a man with no point to life. “Love & Theft” closed with “Sugar Baby”, a slow track about looking at society overall and Modern Times crashed and burned with the “Desolation Row” update, “Ain’t Talkin’”. I think it’s time for Dylan to be able to end an album on a fun track.

I think in the end, the point of Together Through Life is to show what Dylan can do really quickly and really fast. The record shows that after three straight, drop-dead serious albums, Dylan took the time to have a fun record with half of his touring group and two excellent guest musicians. Mike Campbell’s guitar work is excellent and David Hidalgo’s accordion adds to the wonderful, old-time atmosphere spread throughout the record. I understand why there are a few unfavorable reviews, but is it not possible for Dylan to kick back, have fun and make an enjoyable record? Why does it always have to mean something with Dylan? Yes, the record is called Together Through Life, despite the fact that most of these songs deal with lost, even tortured, love, but beyond that, there are no hidden meanings. I mean, where’s the meaning of “Shake shake Mama like a ship going out to sea”? Get this record now and sit back and enjoy what Dylan made. Yeah, there aren’t any Blood On The Tracks here, just old fashioned, fun blues and rock and roll.

Posted by danhofstra at 7:08 AM

Welcome To "Journey Through Dark Heat"

I'm glad you found this magnificent (if I do say so myself) blog of album reviews...mostly.
I generally just talk about whatever musical topic I can think of.
If you do happen to visit, please leave a comment! I'd love to hear from my readers.
The best way to see my past reviews is to go here!
Also, join the forum here.
You can also check out my other blog, Every Little Thing.

The writer of this blog is....

danhofstra
Middleburg, Florida, United States
I am a print journalism student at Hofstra University who is an avid fan of 1960s and '70s music, particularly the Beatles.

My "Friends To Go"